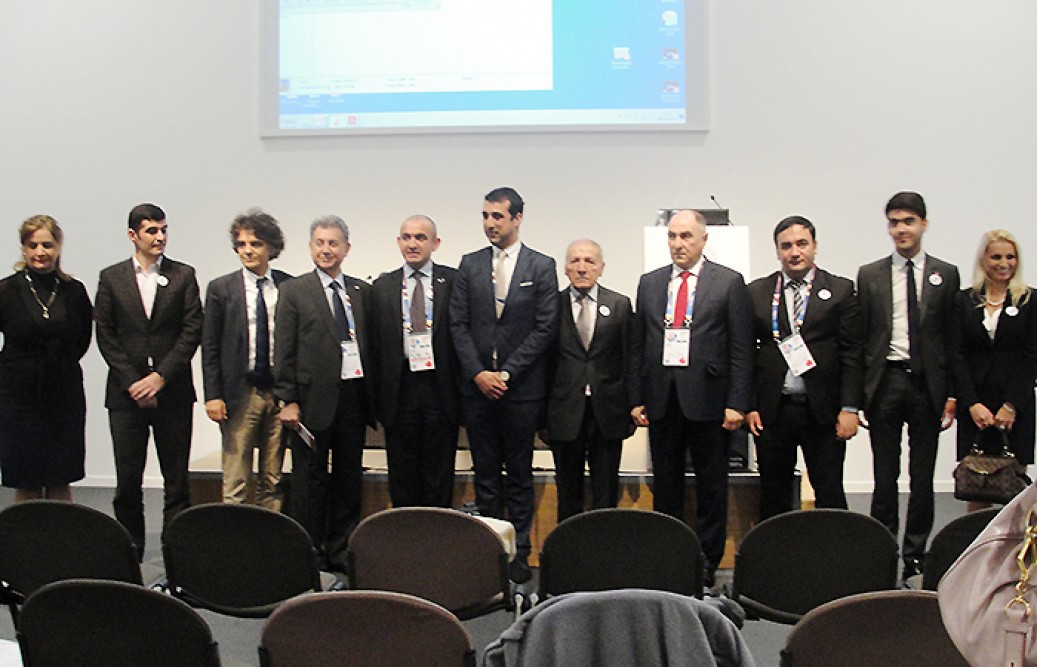 As is known, Azerbaijan National Academy of Sciences (ANAS) President Akif Alizade led from October 5 to 12, the delegation paid a visit to Italy and Switzerland. The goal is to "Milan EXPO-2015" in the event jointly with the Heydar Aliyev Center was to attend the conference.

The delegation of the National Academy of Sciences, academician-secretary of the Institute of Information Technologies of the National Academy of Sciences, academician R.Aliguliyev, Istimaiyyətlə relations and promotion of science chief Zulfiqar Farzaliyev, head of the Department of Geology and Geophysics Institute of the mud volcanoes, geology-mineralogical sciences Adil Aliyev International Relations with International Organizations Department, Department Head, PhD Nurida Guliyev, the head of the department of foreign relations department of academic institutions were represented Benjamin Seyidov.

First, the city of Turin (Italy) at the invitation of Mayor's Office held a meeting with a delegation from the organization. Vice-Mayor of the city of Turin, the head of the Azerbaijani delegation has accepted the National Academy of Sciences Akif Alizade gave detailed information about the event, spoke about the recent achievements. Then the delegation had a meeting with the Turin Academy of Sciences. The guests got acquainted with the activities of the organization. The scientific significance of the ancient books stored at the Academy and met with great interest.

Rector of the Polytechnic University of Turin also represented at the meeting informed the delegation about the organization. Discussed the future of scientific cooperation, highlighted the need for the exchange of doctoral scientists.

"Milan EXPO-2015" within the framework of the academic conference held jointly with the Heydar Aliyev Center A.Alizade made a report on Azerbaijan biomuxtəliflliyi plant resources. That said, with its diversity of soil and climatic conditions and relief is considered one of the richest biodiversity. 9 out of 11 climate zones in the world where the flora of the unique genetic resources, as well as the existence of the diversity of wild and cultivated plants is pre-determined. Academic noted that the diversity of the natural flora of the Caucasus, which accounts for 70% of the 935 species of plants and 125 species of plants, there are nearly 5,000 families. The head of the origin of many species of plants and cultivation, the population of wild plants for food, medicine and agricultural purposes and others. informed about.

Academic A.Alizade in 2003 by the Council of Ministers in order to provide practical solutions to the problems in the region, the National Academy of Sciences Institute of Genetic Resources and the establishment of National Gene Bank said: "This is a very valuable example of the bank in 7100, which represents the national gene bank rare plant species, 4,000 plant samples in the field gene bank are kept. " Noting that we live in the age of genomic and high-tech plans for the academic study of biodiversity in the world of science was established in accordance with the strategic directions. The scientist and research activities of the targets established in the coming years, not only to Azerbaijan, expressed his confidence on the valuable contribution to world science. In the near future for humanity from hunger, disease, severe climate change, food, population growth and other problems opening speech, noted that a number of facts and forecasts.

The conference, academic R.Aliguliyev "Oil strategy ICT strategy: achievements and perspectives" was presented. First of all, the importance of the event, which marks the highest level of academic organization R.Aliguliyev of the Heydar Aliyev Foundation and expressed his gratitude to the Heydar Aliyev Center. The work done in the field of ICT in the country, important trends, priorities, providing information about the speaker and forthcoming, spoke in detail about the new prospects. In the process, the oil capital into human capital, as well as the importance of ICT integration into the society of knowledge brought to the attention of the conference participants. Scientist at the Institute of Information Technology by providing information on the activities of this organization, gave detailed information on the scientific aspects.

During the visit, the delegation of Lugano, at the invitation of the Mayor's Office participated in a conference held in Lugano, Switzerland. President of ANAS, academician Akif Alizade, food safety, food security in the country, in terms of scientific research in the field of grain on developments.

At the conference, academic R.Aliguliyev of ICT in the country and provided detailed information about the work done.

The visit of the delegation of Italy and Switzerland, the European community of values, is of great importance in terms of the expansion of international relations.