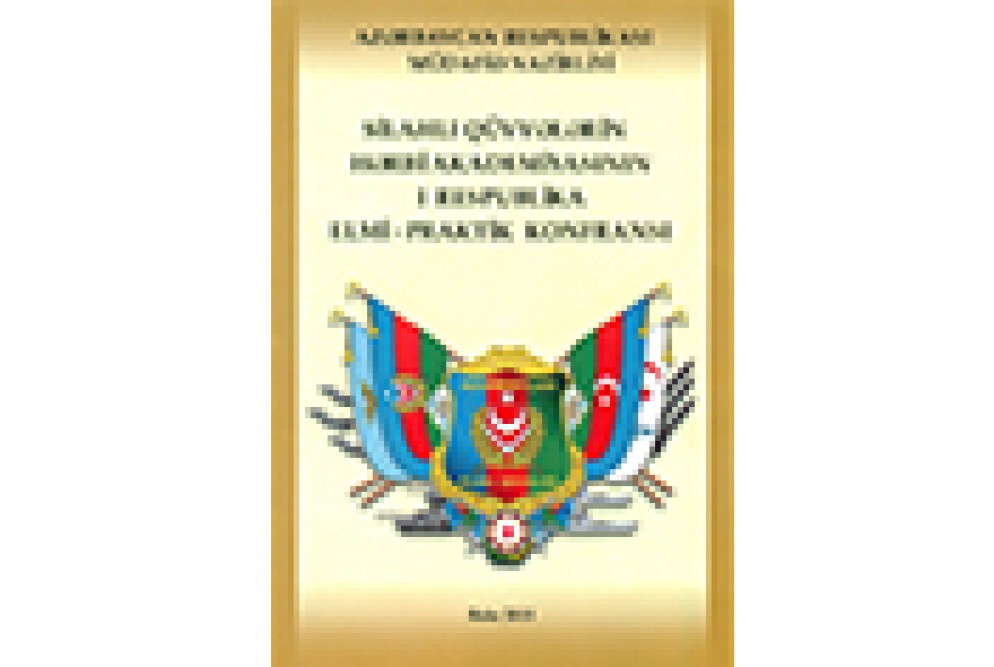 ANAS, academician-secretary of the "War of the science development prospects" I made a presentation of the scientific and practical conference 2015-05-25 16:48:42 / CONFERENCES

Minister of Defense confirmed on May 16 that "the work plan of the Armed Forces in 2015," according to the Military Academy of the Armed Forces, "military science" Prospects of development of the scientific and practical conference on the topic. The country's more than 40 ministries, committees, higher education institutions, was attended by delegates from 350 institutions and research centers.

The national leader Heydar Aliyev and our compatriots who died for the liberation of our lands commemorate After singing the national anthem and a minute of silence was declared open.

Opening the meeting, Defence Minister Colonel-General Zakir Hasanov, the Armed Forces of the foundation laid by the great leader Heydar Aliyev, President of Azerbaijan Ilham Aliyev today to become the region's most powerful army brought to the attention of the conference participants.

The national security concept and military doctrine that defines the main directions of development of the Armed Forces, Defense Minister of the Armed Forces of the documents noted that the successful implementation of reforms in all spheres, the results of the work done, he said: "Armed Forces on the frontline units to achieve full advantage he said. Currently, the army, the most modern, high-quality weapons and equipment have been provided with. At the same time, this technology, weapons systems able to handle the high scientific, theoretical and practical skills training of the personnel of the Armed Forces, which is one of the main tasks facing the government. For this reason, the Ministry of Defense, which is subject to special educational institutions to develop the country's leading educational institutions and is always carried out with the cooperation and this work will produce results within a short time. "

Then the chief of the Military Academy of the Armed Forces, Lieutenant General Haydar Piriyev "War, scientific and military education: development and prospects," Minister of Communications and Information Technologies Ali Abbasov, "The role of information technology in the development of War", director of the Institute for Strategic Studies under the President of the Academy of Management, Professor Elman Nasirov, "the role of national leader Heydar Aliyev in the development of military science" issues, the Supreme Attestation Commission under the President of the Republic of Azerbaijan, Arif Mehdiyev, deputy chairman of the parliament's security and defense committee, MP, secretary of ANAS, Institute of Information Technology The director spoke a wide range of academic R.Aliguliyev.

Azerbaijan National Academy of Sciences, said the scientists were carrying out large-scale reforms on various aspects of science coordination, integration in the international scientific environment, said that the work done towards the identification of new scientific priorities. "One of the scientific priorities is to ensure the development of military science and formation" - the intersection of all the sciences, according to the academic nature of this science, he stressed: "All the sciences should provide support to improve the country's defense capability, measures should be taken to solve the existing problems. Other areas, such as the establishment of a knowledge society based on high technology hərbimiz well. "

The scientist noted that the military science in the development of fundamental research works will be carried out to determine the priorities should support this work with other organizations, carry out joint activities. He is also to support the development of military science, with special qualifications for the armed forces of the military-theoretical and practical knowledge and training of personnel to implement the intellectual thinking of having touched necessity. He is saying that there is great potential for the formation of military science in the country, said that the multidisciplinary nature of science should be formed for this purpose.

He is still in the mid-90s on the initiative of national leader Heydar Aliyev's care and to improve the country's defense power under his leadership, a number of important scientific and academic ICT projects have been implemented.

Then the chief of the Military Academy of the Armed Forces, Lieutenant-General by the Higher Attestation Commission under the Azerbaijani President Heydar Piriyev associate professor of naming certificate was submitted.

After the plenary part of the military-theoretical, military, national security, military, humanitarian and military departments of medicine and scientific heard.

At the end of this issue for the first time, the scientific and practical issues of great importance to the achievement of the conference, which is supported by a number of allegedly said.