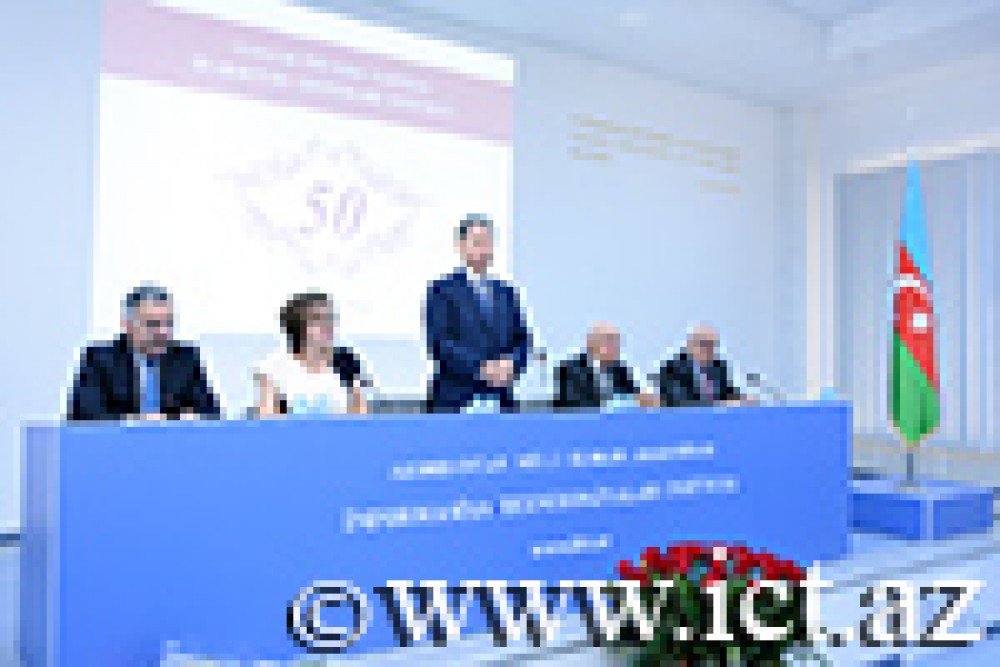 On May 22, 2015, the National Academy of Sciences Institute of Information Technology Management Systems Institute (ISI) held an event dedicated to the 50th anniversary. At the meeting, foreign guests, government officials, members of the Department of Physics, Mathematics and Technical Sciences, National Academy of Sciences and higher education institutions of the republic of scientists and experts, representatives of the media.

The event was opened by the President of ANAS, academician Akif Alizadeh ISI congratulated the participants of the event's 50th anniversary.

According to the academician, the Institute's activities "Azerbaijan 2020: vision to future" scientific development concept and new destinations in order to adjust the priority of the Cabinet of Ministers dated 15 April 2014 "with the Institute of Cybernetics" renamed the "Institute of Control Systems" was named.

Alizadeh computer science in the formation of the institute and an irreplaceable role in the development of highly qualified personnel in this area, he said.

Then Director of the Institute of Management Systems, academician Telman Aliyev's ISI (Institute of Cybernetics) had been founded in 1965, dedicated to the study of the problems of strategic and scientific research institute of the main goals of the implementation of a high theoretical level, he noted. Speaking about the organizational activities of the institute's research scientists, the "identification theory", signal processing, mathematical modeling, optimization, artificial intelligence, and the different types of intellectual information systems, oil and gas, oil refinery, transportation, energy, as well as in the fields of distributed intelligent monitoring and explore many fundamental problems, such as diagnostic systems, he said.

Aliyev of the research institute, signed by President Ilham Aliyev, "the development of science in Azerbaijan in 2009-2015 State Program on the implementation of the National Strategy on" scientific programs are based on compliance with the order noted.

ISI's academic as well as the US, Germany, Italy, Japan, Russia, Turkey and other countries have cooperation with scientific research institutions, he said.

State Student Admission Commission Maleyka Abbaszadeh said at the start of the ISI and the scientific research environment in the formation of the specialist noted. As a senior researcher at the institute, considering the fact that he was proud of the performance, he added. SSAC's institute of human resources, and it was organized by former employees said that the main reasons for the successful operation of the organization.

In his speech, Deputy Minister of Communications and Information Technologies said that in May, an event dedicated to the 150th anniversary of the International Telecommunication Union to act as the Gold Partner, the 134 anniversary of the establishment of telephone communications and the ISI to celebrate the 50th anniversary of Azerbaijan's only oil, but and the scientific and technological potential and is one of the countries with other areas of the world and prove its place. The ministry will continue active cooperation between institutions of ANAS said.

Then the National Academy of Sciences, academician-secretary of the Institute of Information Technology, the academic R.Aliguliyev science attention and care of national leader Heydar Aliyev, President Ilham Aliyev successfully continues this policy as a result of the extensive opportunities of scientific achievements and Azerbaijan one of the leading countries of the ITU noted that the monitoring schedule.

He noted that the ISI's 50th anniversary in the history of computer science principles soykəndiyinin proof. Selecting young scientific staff of the institute since its inception in Moscow, Kiev, Novosibirsk and other cities, sending it to develop cutting-edge knowledge of the launch of this institute has led to the formation of many scientific areas.

"A lot of teachers in higher education institutions in the MIS department was formed thanks to the skills and knowledge gained as a specialist function. Big ideological influence in accordance with the requirements of the modern era, the importance of these institutions to increase gradually, "- he said that the academic scientist.

According to the scientist, more effective management of the society, scientists and experts in the fields of integration into the world stands on important tasks and the expansion of international cooperation, it is necessary to perform these tasks.

The occurrence of the event's 50-year history of the Institute of Management Systems, reflecting the short film was shown.

After the event, the exhibition hall of the Institute of Management Systems and foreign guests got acquainted with the research laboratories.