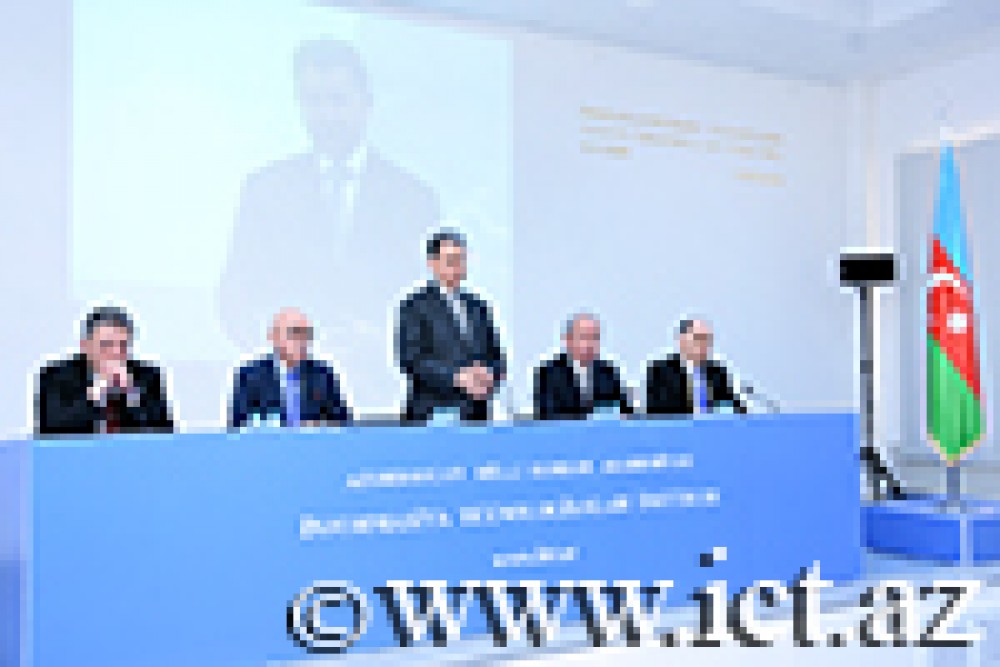 Information security multidisciplinary scientific-practical conference on the problems of the Second Republic 2015-05-15 09:39:07 / CONFERENCES

The exhibition dedicated to the 150th anniversary of the International Telecommunication Union has begun.

The event was opened by the President of ANAS, academician Akif Alizadeh conference devoted to the 150th anniversary of the International Telecommunication Union for the scientific community as an important event.

Alizadeh is a member of the International Telecommunication Union, and it pays great attention to cooperation with the organization, he said.

Academic World Telecommunication and Information Society Day theme this year, "Telecommunications and ICT: the driving forces of innovation," he said. Promoting the urgency of the issue of the establishment of the ICT sector and the information society is dependent on the effective and innovative activity, as well as the innovative use of ICT opportunities and stressed the impossibility of achieving.

Humanity's future is based on the innovative development of ICT capabilities of scientists saying that "Azerbaijan 2020: vision to future" Scientific Concept of Development, said that the main goals of support and innovation potential. To achieve this goal, the formation of a secure information society and knowledge economy, knowledge-intensive technology, the importance of speeding up the process of creating products and services, he added.

NASA scientists and scientific institutions and organizations by providing high-quality Internet services that allows the integration of world science, research and education networks AzScienceNet-computer network of the national operator of the main directions of its activity one spoke said that it related to information security.

AzScienceNet GEANT recently become a member of the support of the Ministry of Communications and Information Technologies Ministry and the Education Ministry, thanked the management of both, saying it plays a crucial role.

"Information security is one of the measures on the preparation of the scientific staff in the area of ​​the Heydar Aliyev Foundation, the Ministry of Communications and Information Technologies, the Ministry of Education and the Institute of Information Technology organized by the Republican Olympiad in Informatics among high school students. The main purpose of knowledge competition held every year in the future, an expert in the field of computer science and programming to talented students to provide support. There is no doubt that the majority of young people in different competitions such as professional staff in this area are formed, "- he said Alizade.

At the end of the academic scope of the conference is aimed at ensuring a high level of information security outside the country to come out in the future and to take appropriate account of international status, he said.

Later, the Minister of Communications and Information Technologies, academician Ali Abbasov "state policy in the field of information security," he said in a speech. Information security is one of the priorities of the state policy of ensuring the proper level and said that the works carried out in this direction. He noted that to ensure the security of the state, in particular, it is important to mobilize the intellectual potential of society.

The state said that cyber security is a great advantage to the conduct of investigations of a number of academic institutions are being taken in this regard, he stressed.

The minister also noted that in a period of rapidly increasing use of the Internet, cyber inevitable. He is 2 thousand computer virus infected each week, noting that more than 30 percent said that the volume of cyber attacks each year. "All this information society, cybersecurity, information security, strengthen forces. Azerbaijan is an active participant in the global space has intensified as one of the preventive measures implemented in this direction. After a while, our country will be hosting the global sporting event. One of the most important issues for the organization of the Games is to provide a complete information security. We have mobilized all our efforts in this direction ", - he said.

Later, Deputy Minister of Education F. Gurbanov said that the importance of the conference. He said that in the modern era, one of the leading IT major goals of each country's development.

According to him, special attention is paid by the state of information technology. President Ilham Aliyev's instructions, orders and output, a priority area of ​​the country, as it is reflected in the documents.

In order to ensure the development of this area is a serious need for proper training, highlighting the area of ​​information technologies with special attention paid by the Ministry of Education and said that measures are being taken in this direction.

Then the secretary of ANAS, director of the Institute of Information Technology, the academic R.Aliguliyev XXI century "information hazards and pest control strategies," the report was presented.

He said that at the end of the twentieth century - the beginning of the twenty-first century, mankind has been existing threats, including threats of information. In this short time interval of the formation and crystallization of the Internet, human values ​​are very difficult process. In addition to the measures taken by the government to ensure information security, and intervention is required to actively participate in the scientific community.

According to him, the development of information technologies in the life of society in almost all areas, not just the positive and negative consequences. Therefore, the issue of information security and information regarded as a global problem, it is necessary to be ready to fight against the dangers.

Academic noted that the information policy of the national leader Heydar Aliyev laid the foundations of its strategic objectives, direction, and resources have been identified. President Ilham Aliyev new stage of development by maintaining a high level of information security policy to ensure it has a special place in the multifaceted factors. "Information Society Development in Azerbaijan Republic for 2014-2020," National Strategy in the establishment of an information society in the country, and for the development of cost-effective use of opportunities provided by the state and society.

He is struggling with the dangers of information, stressed the need for mechanisms to carry out the defense. He said that the national strategy of information security systems across the country, one of the most important sub-systems have great potential CERT network. CERT information about the dangers faced by the country gathered together as part of the analysis should be done, should be investigated and the proposed mechanisms against them.

It will also investigate the problems of multidisciplinary field of information security and the necessity of improving the legal and regulatory framework established in this area, he added.

"Real world virtual problems, the virtual world is waiting for a solution to the real problems," - said the scientist's speech to solve scientific problems in the field of ICT at the end of scientists and experts from all over the country, and called for cooperation with scientific institutions.

Then "X Republican Olympiad in Informatics among university students" were awarded to the winners. The winners were presented with prizes.

It should be noted that the various state conference, 74 scientific reports were presented to the scientific and educational institutions.