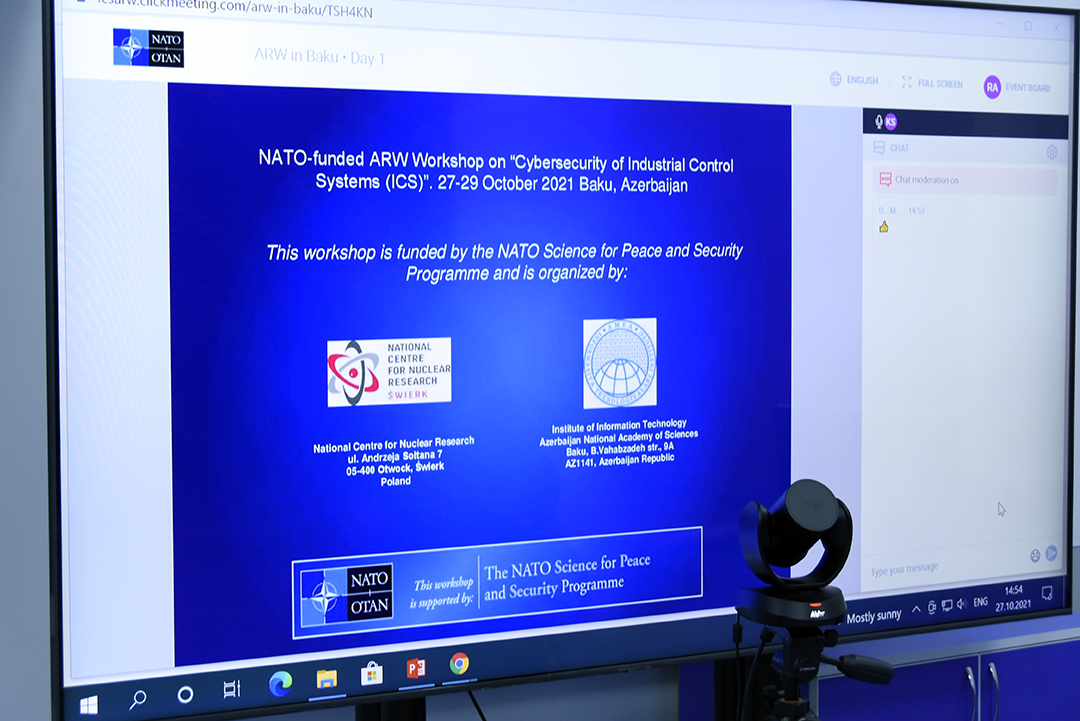 An online international conference on "Cybersecurity Problems of Industrial Management Systems" started on October 27 with the supporting the NATO Science Program for Peace and Security, together organized by the Institute of Information Technology of ANAS and the Polish National Nuclear Research Center. At the opening ceremony of the conference, high-ranking officials of the Azerbaijani state, heads of research institutes of ANAS, scientists representing about 20 countries, including Turkey, USA, Canada, Poland, Ukraine, Sweden and Kazakhstan, convenient international organizations and respectable foreign companies and experts, as well as media representatives.

Opening the event, Vice-President of the Azerbaijan National Academy of Sciences, Academician Isa Habibbayli greeted all participants and emphasized the importance of the international conference dedicated to the discussion of a number of important problems and the search for solutions.

The vice-president of ANAS said that new realities appeared in the world under the influence of the IV industrial revolution. Application of Internet technologies and cyberphysical systems to all spheres of human activity - management, military, economy, industry and agriculture, communication and transport infrastructure, various critical areas He said that thanks to him, mankind has entered a new stage of development.

The academician said that one of the priorities of the Azerbaijan National Academy of Sciences in the near future, based on new challenges and realities, is to study the complex problems created by the IV Industrial Revolution, the scientific and theoretical problems of ensuring comprehensive security of all spheres of society.

Isa Habibbayli glamorized the prestigious conference held with the support of the NATO Science Program for Peace and Security as an important contribution to Azerbaijan-NATO cooperation, and expressed deep gratitude to the NATO leadership on behalf of the Azerbaijani scientific community.

The academician also thanked the Polish National Center for Nuclear Research and the Institute of Information Technology of ANAS for organizing the high-level conference. He said that Poland and Azerbaijan are friendly and partner countries, and these relations are based on deep roots: “We appreciate the cooperation of Azerbaijani and Polish scientists in the field of cyber security. I think there is a high potential for further development of these relations.”

NATO Representative James Appathurai, Head of the Education System Informatization Department of the Ministry of Education of the Republic of Azerbaijan Vusal Khanlarov, Head of the Cyber Security Department of the Polish National Nuclear Research Center, International Projects Coordinator, Chief Researcher, Professor Jacek Gajewski, Head of the Ministry of Foreign Affairs Jafar Huseynzade, Deputy Chairman of the State Customs Committee of the Republic of Azerbaijan, OSCE International Expert on Customs Affairs in Central Asia, Major General of the Customs Service, Doctor of Sciences, Professor Igbal Babayev, Convener of the Internet Hall of Fame George Sadowsky, Academician-Secretary of ANAS, Head of the Institute of Physics Director, Academician Arif Hashimov, Director General of the Institute of Management Systems of ANAS, Academician Ali Abbasov, Professor of Stockholm University Oliver Popov spoke about the urgency of the problems of cyber security of industrial management systems.

Then the vice-president of ANAS, academician Rasim Alguliyev greeted the guests, organizers, participants and media representatives of the international conference.

Academician R. Alguliyev expressed gratitude to NATO's Science Program for Peace and Security for its support in organizing such an important conference. The scientist said that the cooperation between NATO and the Academy of Sciences began with the "Virtual Silk Road" project, established in 2003. He noted that today's conference will discuss the problems of cybersecurity of Internet infrastructure, cyberphysical systems, in short, operating technologies, which emerged as a result of the challenges of the Industry 4.0 revolution.

It should be noted that the section meetings of the 3-day international conference will focus on “Cyber Security of Critical Infrastructures”, “Cyber Security Education: Programs and Laboratories”, “Sensitivity Analysis, Testing and Risk Management”, “Attack Detection, Mitigation and Prevention” and others, discussions will be held on the directions.