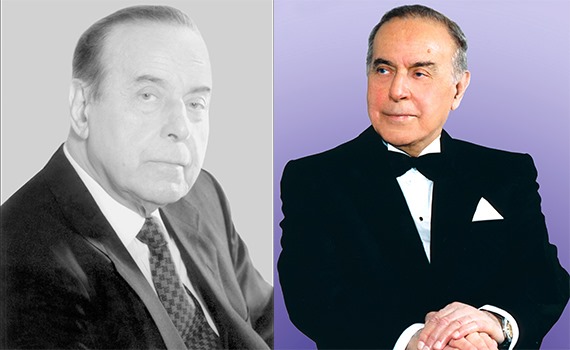 Remembering the Great Leader: The road to the Karabakh Victory and the son who fulfilled his father's will 2021-05-10 17:20:00 / IMPORTANT EVENTS

Our people celebrate the 98th anniversary of the birth of their great leader with a different meal. The 44-day Patriotic War ended with a glorious victory, and the brave Azerbaijani Army under the leadership of Muzaffar Supreme Commander-in-Chief Ilham Aliyev liberated Karabakh. The 30-year longing of our people for their homeland and land degradation has come to an end. We have joined our native Karabakh. The way to this Victory is based on the immortal ideas of the eldest son of Azerbaijan, world-famous politician, genius Heydar Aliyev.

The greatest wish of the great leader Heydar Aliyev was the liberation of Karabakh from the clutches of the enemy, the restoration of our territorial integrity. Years ago, the national leader said with great foresight: “We will resolve the Karabakh issue. It takes time, it takes time. Azerbaijani lands can never be taken away from him. Our occupied lands will definitely be returned.”

At that time, it matured after 17 years. On the basis of the solid foundation laid by the national leader, Azerbaijan has strengthened year by year, strengthened its position in the international arena, and created a powerful army. It was economic power and our brave army that drove the enemy out of our lands, and our tricolor flag began to fly proudly in the homeland, in Shusha, the beating heart of Karabakh. The enemy, who was broken in the back with an iron fist, was forced to sign an act of capitulation, and our territorial integrity was ensured.

Today, the people of Azerbaijan once again honor the memory of Heydar Aliyev, who left indelible marks on his fate and history. Every month and every day of the rich and meaningful life of Heydar Aliyev, the savior of Azerbaijan, who gave his life for his homeland and people, is an epic. Every year on May 10, memories of the Great Leader are expressed, and photos taken at different times take us back to the days of Heydar Aliyev.

In the 1970s, Azerbaijan was one of the most backward parts of the former USSR. Until then, the leaders of the republic reconciled with this and did not try to change the situation. This unfavorable situation lasted until the July 1969 plenum of the Central Committee of the Communist Party of Azerbaijan elected Heydar Aliyev First Secretary.

With the coming to power of Heydar Aliyev, unprecedented revival and development, huge construction work began in our country. Unique enterprises of that time - household air conditioners, deep-sea factories, public buildings that still adorn our capital today - "Gulustan" Palace, Heydar Aliyev Palace were built in Baku. Also, huge residential areas such as Yeni Ahmadli and Gunashli were built. Agricultural production has increased many times. As a result, the living standards of the population have improved, and many social projects have been implemented. The years 1969-1982, when Heydar Aliyev led Azerbaijan for the first time, are rightly characterized as a period of renaissance.

Unlike the previous leaders of the republic, Heydar Aliyev often visited the regions, communicated directly with people, and was personally interested in their problems and concerns. His meetings with scientists, writers and cultural figures also became a tradition.

In 1982, Heydar Aliyev was elected a member of the Politburo of the Central Committee of the Communist Party of the Soviet Union, and was appointed First Deputy Chairman of the USSR Council of Ministers. Taking advantage of his position in the central government, the eldest son of the Azerbaijani people, the Union directed a number of important projects to Baku. His enthusiastic activity, high business acumen, and innate organizational skills in those years made him even more famous.

Attitudes towards Heydar Aliyev changed after Mikhail Gorbachev came to power in the USSR. He resigned in 1987 due to a serious disagreement with the Secretary-General. A year later, a separatist movement broke out in Nagorno-Karabakh, and Azerbaijan's dark days began. Probably, if Heydar Aliyev had been in power at that time, the Azerbaijani people would not have faced the Karabakh problem, Black January and other tragedies.

In the early 1990s, during the difficult days of the Motherland, the Great Leader returned to Azerbaijan. The then leadership went to Nakhchivan, where he was born and grew up, because he blocked his way to Baku.

Elected Chairman of the Supreme Soviet of Nakhchivan, Heydar Aliyev protected the autonomous republic from Armenian aggression and political turmoil. For the first time in seventy years, he raised our tricolor flag in Nakhchivan.

Returning to power in the summer of 1993 at the insistence of the people, Heydar Aliyev took on the responsibility and the mission of salvation. He brought Azerbaijan out of difficult trials and brought peace and tranquility. He saved the country from the danger of disintegration and loss of independence by resolutely preventing separatist and coup attempts. The newly formed regular army was able to stop the constant attacks of the Armenians on our lands.

At that time, the country was experiencing a deep economic crisis, and the state treasury was empty. Although Azerbaijan was rich in natural resources, many of them were inaccessible. It took many years to revive industry and agriculture, so it was necessary to find unusual solutions. Heydar Aliyev knew where the key to success was. He knew that the only way out of the deep economic and social crisis was the oil in the Caspian Sea. Azerbaijan would not be able to pull it out. As political and social stability in the country was not yet strong enough, foreign companies were reluctant to take risks and invest in Azerbaijani oil. Heydar Aliyev managed to convince the giant oil companies: investment in Azerbaijan will not sink. After lengthy negotiations and discussions, finally, on September 20, 1994, the "Contract of the Century" was signed, which was the starting point for the development and future success of Azerbaijan.

The second period of Heydar Aliyev's leadership in Azerbaijan is rich in these and other fateful events.

The magnificent monument to national leader Heydar Aliyev in the Alley of Honors has become a symbol of eternity. High-ranking guests of Baku - statesmen and politicians, prominent representatives of science, art and culture of the world visit this monument and pay tribute to the memory of the Great Leader of our people.

Every year on May 10, people who come to the Alley of Honors pass by the monument to the Great Leader and bow before his spirit. The love of the people for Heydar Aliyev is eternal. As long as there is Azerbaijan, as long as this nation exists, there will be Heydar Aliyev.

Today, when thinking about the eternal Leader, I remember the words of President Ilham Aliyev in his address to the people: “I am happy to have fulfilled my father's will. We liberated Shusha! This is a great victory! The souls of our martyrs, the Great Leader, are happy today! Let your eyes be clear Azerbaijan! Let your eyes be clear, Azerbaijanis of the world!”

One of the greatest services of the national leader to his people is to raise a son like the President, Muzaffar Supreme Commander-in-Chief Ilham Aliyev, who introduced Azerbaijan to the world, liberated Karabakh and fulfilled his father's will.