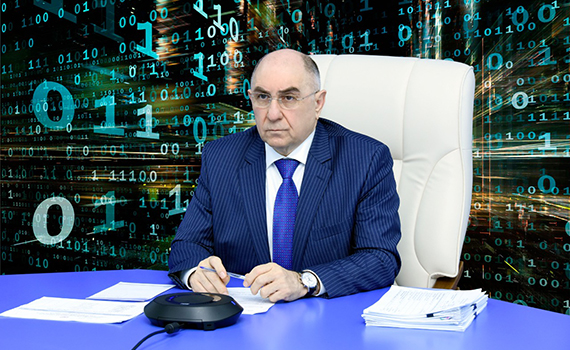 On May 7, the Institute of Information Technology of ANAS hosted a scientific seminar on "The impact of digital technologies on social development and family welfare" dedicated to the International Family Day.

Speaking at the online event, Vice President of ANAS, Director of the Institute of Information Technology, Academician Rasim Alguliyev noted that there is no society outside the family, information and communication technologies (ICT), the information society environment is a very important factor for modern families.

The speaker said that the establishment of the International Family Day for the first time by the UN General Assembly in 1994, the celebration of such a day at the international level, proves the growing sensitivity to family institutions around the world.

Emphasizing the important role of ICT in the development of society, Alguliyev also touched upon the problems it creates in modern times. He noted that at the current level of development of the global information society, ICT, as in all spheres, has not passed without an impact on people's lives and activities, the institution of the family.

"The family itself is a small social environment," he said, adding that the family has a great mission in raising a new generation and a healthy citizen. He noted that the traditional duties and functions of the family have recently changed their nature under the influence of ICT, and freedom of information has led to the creation of an uncontrolled information environment.

The director of the institute said that families are now the target of insidious forces around the world, family values are deliberately damaged by specially trained cybercriminals, and the destruction of the foundations of society has become one of the main problems.

According to the academician, today parents have limited opportunities to control and influence their children, because children are attracted to the Internet: “The Internet plays an important role in the formation of children's personality and worldview. It is safe to say that minors are currently the most exposed to the negative effects of information technology.

According to R. Alguliyev, in the conditions of innovations brought by the IV industrial revolution, the problems arising in the protection of personal data against the background of the development of artificial intelligence and freedom of information make it necessary to form the family institution in accordance with modern requirements.

According to the academician, today parents must have the necessary ICT knowledge to be able to control their children and protect them from appropriate dangers.

The vice-president of ANAS said that in order to maintain their leading role in the family, parents should get more information and acquire new knowledge in order to control the activities of children. Special programs are already being developed in the developed countries of the world to raise educated and knowledgeable parents. Modern challenges require parents of the XXI century to have an electronic passport.

The director of the institute noted the importance of deepening research on technological, legal, psychological, sociological, philosophical and other aspects of the family at ANAS in order to provide scientific support to the state policy in this field.