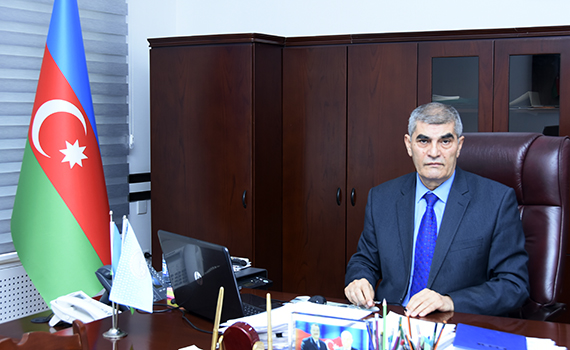 The Institute should be closely involved in scientific research on the liberated territories 2021-04-19 12:14:00 / CONFERENCES

This opinion was voiced by the vice-president of ANAS, director of the Institute, academician Rasim Alguliyev during his speech at the next online meeting of the Scientific Council of the institute.

Implementation of the tasks arising from the Decision of the Presidium of ANAS dated January 12, 2021 "On the tasks of ANAS in connection with the research work on the liberated territories of Azerbaijan" at the next online meeting of the Scientific Council of the Institute of Information Technology of ANAS was discussed.

Rashid Alakbarov, Deputy Director for Technologies, Head of Department, PhD in technical sciences, Associate Professor, said that the restoration and development of the liberated territories of Azerbaijan is one of the priorities of state policy. President Ilham Aliyev stated that the state will soon take comprehensive measures to revive life in the liberated territories, build the most modern socio-cultural infrastructure and restore transport and communication lines. All this puts important tasks before the Azerbaijan National Academy of Sciences, which is the main center of scientific potential in the country. In this regard, ANAS has developed a joint action plan with about 10 ministries of the republic.

He noted that implementation of scientific-practical support to the project on development and implementation of the concept of "Electronic Karabakh" in front of the institute, provision of scientific-methodological support for the preparation of the Karabakh encyclopedia on the online platform, the establishment of network infrastructure and provision of Internet services for scientific and educational institutions in the liberated territories, the implementation of ICT education on remote and physical platforms in the occupied territories, and other important tasks.

Speaking later, Academician Rasim Alguliyev said that thanks to the consistent policy of the President and our brave army, we won the Second Karabakh War, and in a short time Karabakh became an integral part of Azerbaijan.

He said that after the end of the 44-day war, a number of scientific problems arose in the liberated territories, adding that Azerbaijani science already had greater responsibilities. He noted that ANAS and its component Institute of Information Technology should be closely involved in solving these problems. Scientists and researchers must continue to work harder and make important contributions to the development of our science.

Academician R. Alguliyev reminded that while the war was still going on, the institute prepared proposals on scientific priorities related to the territories affected by the Armenian aggression in the Armenian-Azerbaijani Nagorno-Karabakh war.

These proposals were discussed and approved by the Department of Physical-Mathematical and Technical Sciences of ANAS and the Presidium of ANAS and received legal status.

“Today, we must implement the relevant proposals and effectively use our existing intellectual potential to fulfill the tasks set by the state. It is extremely important that the institute is closely involved in the work on the territories affected by the Armenian aggression in the Nagorno-Karabakh war, both as a government agency and as a patriotic intellectual,” he said.