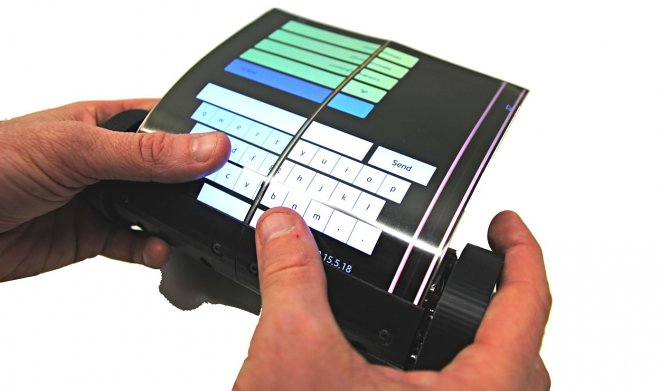 A group of researchers at the University's Media Laboratory at Queen's University (Canada) has developed an original device called MagicScroll, which does not look like a tablet or a smartphone, but is endowed with the functions of both gadgets.

According to the developers, to create a MagicScroll with a flexible touch screen they were inspired by the ancient Egyptian papyrus scrolls. This device with a new form factor, manufactured using 3D-printing. Switchings on the screen are performed by turning the wheels located at the edges of the gadget.

If additional information is required, or a deeper "dive", the user can separate the screen from the enclosure to expand the viewing format. The flexible display has a resolution of 2K. Thus, we can talk about creating a new type of mobile devices with an image on the display that exceeds the Retina definition.

The unusual cylindrical form of the gadget has already shown a number of advantages. In particular, it is much more convenient to hold it in your hand during a conversation than the iPad, and also keep in your pocket. The MagicScroll has a built-in camera that allows you to control the device with gestures in the style of Nintendo Wiimote. The screen is rotated by the wheels on the edges of the cylinder, which are reinforced with robotic drives.