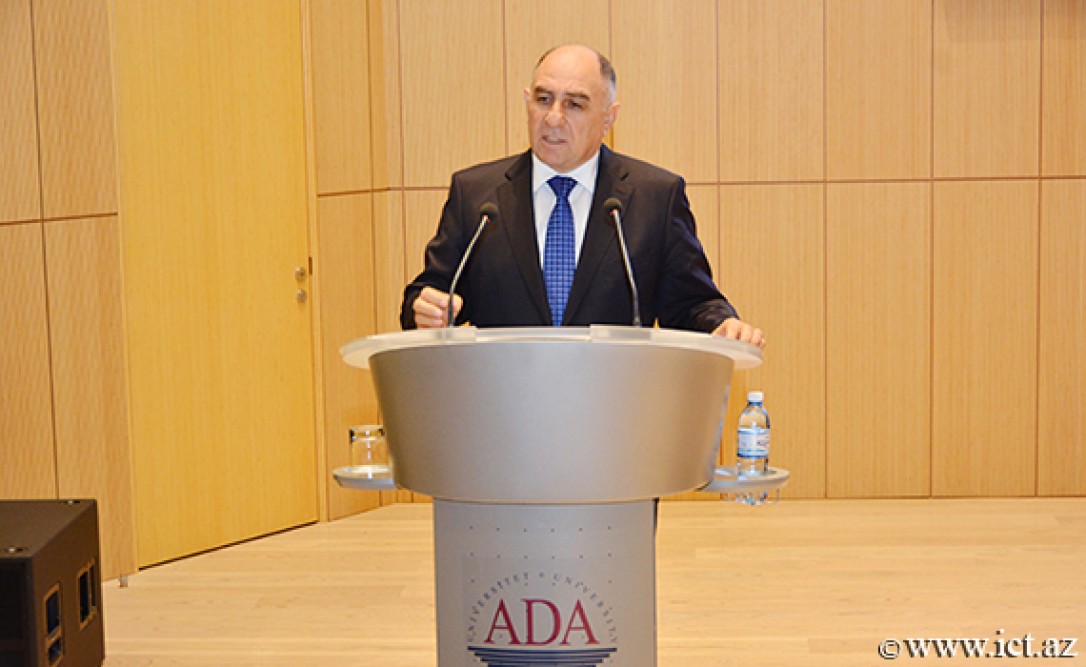 Academician Rasim Alguliyev: "“Internet of Things", one of the most important challenges of the XXI century, is a new research direction” 2016-10-05 13:36:40 / CONFERENCES

On September 23, ADA University held a seminar devoted to “Internet of Things –IoT”. The event brought together delegates from institute and organizations, leading scientist and specialists in the sphere of information technology, including students of the university.

Rector of ADA University Prof. Hafiz Pashayev congratulated student and teacher staff on the occasion of the start of the new academic year and wished them successes.

The scientist at the Maryland University U.S. Academician Roald Saqdeev brought to mind that, era "Internet of Things" is called 4th industrial revolution by politicians and technologists. Making speech on 1st, 2nd, and 3rd industrial revolutions the lecturer noted their adoption by a wide range of public as well.

Then, Professor Daniel Usikov, who was invited from Silicon Valley, located in the state of California and is considered one of the world's IT center, made a presentation on “Internet of Things”.

D.Usikov demonstrated the video on driverless cars, fitness-trackers, smart watches, delivery service through drones and so on. Also, informed about spheres where is used "Internet of Things", positive and negative sides, leading companies involved in the relevant field, existing legal framework, and regulatory requirements. At the end of his speech he sounded the slogan "Internet of Things", will take us to the future!”

Deputy of Milli Majlis Tahir Mirkishili put to the fore the importance of the conference and spoke about opportunities and challenges of 4th industrial revolution. Moreover, he told about the impact of this revolution on the development of ICT, social-economic life and other spheres in Azerbaijan.

Later on, Academician-Secretary of ANAS director of the Institute of Information Technology Academician Rasim Alguliyev highlighted that “Internet of Things", one of the most important challenges of the XXI century, is a new research direction. Scientist drew attention to the studies carried out at the institute chaired by him since the beginning of the 2000s in the relevant realm over priority directions, including defending of theses, publishing various books, monographs, and numerous articles. He said that “Internet of Things” is used in ANAS significantly for seismological, ecological, radiological, meteorological, astronomic and medical studies as well as monitoring.

According to R.Alguliyev “Internet of Things” causes revolutionary changes not only in the industry sector, but also in all activities of society, and forms new values and attitudes.

“Besides opening up opportunities for world science “Internet of Things" creates a number of problems in different directions," – said academician and notified the key problem in this area the integration of the virtual space in real space.

In conclusion, the topic was discussed and numerous questions were responded.