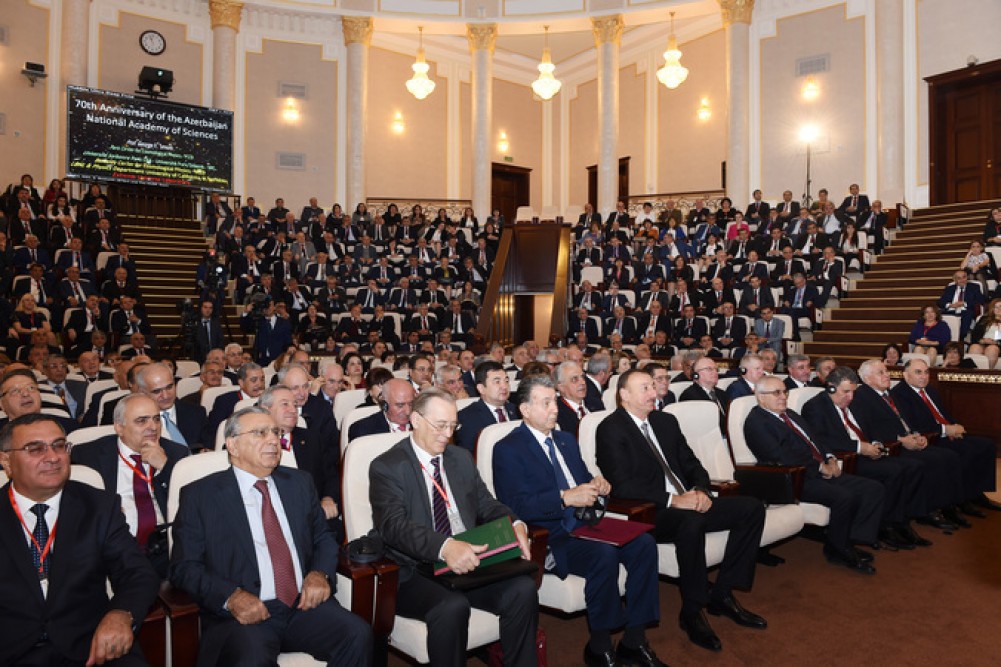 President of Azerbaijan Ilham Aliyev took part in the meeting. The Head of State made a speech at the National Academy of Sciences.

President Ilham Aliyev congratulated the jubilee. The President of the National Academy of Sciences was successful road for 70 years, played an active role in the development of the country today, scientists have contributed to the development of their scientific research, application of modern technologies in various fields thanks to their scientific activity has been reported. The President recalled that the first years of independence in relation to the academy. Noted that he was of the opinion that there is no need for the organization led by then. The President Heydar Aliyev returned to power only after the high value given to science and scientists, and stressed that the priority of the industry today.

Speaking about the role of scientists in the development of new challenges and threats of the President of any country in the world where the importance of the reliance of its internal resources, he said. He said that the world stability, peace and tranquility of the island in recent years, which is trying to reduce dependence on oil and gas and is able to achieve this.

"I am sure that will continue in the future economic development of our country." - Said the head of state efforts to show the sustainability of economic growth in the coming years, in order not to depend on anyone else to use internal resources, he stressed.

The President of the new situation in the world and called on scientists to put forward their valuable suggestions. The head of state on the basis of demographic development, the scientists have already pointed to the need for new developments on the strategy, and the development of non-oil sector, and called for them to be active on food safety. "The industrial and agricultural sectors to ensure our future development," - the President said that the broadened international cooperation in the space industry. The President of Azerbaijan scientists in the field of military industry, said that the wide square. He noted that today the country produces more than a thousand kinds of military and domestic production is carried out at the Army's basic software.

President Ilham Aliyev of strategic importance for scientists in the field of oil and gas experience in the use of new technologies in order to become acquainted with the world called. "There are many challenges facing scientists. The main desire is that contribute to the development of science and to develop, "- said the head of state stressed the importance of the humanities. He said that multiculturalism, preserving the purity of the language, its rich history in delivering information on scientists in the world to be more complete.

President of ANAS, academician Akif Alizadeh thanked the Azerbaijani President for his participation in the ceremony. Recently, a group of scientists awarded with the Order of the Head of State said that this step of the science, the scientists described as a high price. Akif Alizadeh 70th anniversary of the Academy's staff and came up empty-handed, said that preparing for valuable artifacts. President of the Academy of science and scientists in a more care and attention of President Ilham Aliyev expressed his gratitude to the scientists.

Nobel Prize winner, Professor George Fitzgerald Smoot rich history of the National Academy of Sciences, the scientists in various fields, including physics, biophysics, their achievements in the fields of space industry is aware, he said, scientists interested in cooperation with Azerbaijan, he said.

Director of the Institute for Nuclear Research in Dubna, Russia, headed by Academician Viktor Matveyev, read a congratulatory letter from the science center. "Azerbaijan should be proud of its scientists," - he said Viktor Matveyev relations with Azerbaijani counterparts, the implementation of joint projects, he said, expressed gratitude to President Ilham Aliyev for the attention of science.

The meeting dedicated to the 70th anniversary of ANAS at the end of the official part of the lecture continued.

Rector of the Academy of Public Administration under the President of Azerbaijan, academician Urkhan Alekperov "The role of science in sustainable development of the country," Minister of Communications and Information Technologies Ali Abbasov of Azerbaijan "The development of science and high technologies", Education Minister Mikail Jabbarov, "the scientific institutions of higher education research, "ANAS Secretary of the Department of Biological and Medical Sciences, Ahliman Amiraslanov" The prospects for the development of biological science, "the vice-president of ANAS, academician Habibbayli" The prospects for the development of the humanities "were heard.

President of the Turkish International Academy, professor Darkhan Kidirali Speaking on the occasion of 70th anniversary of ANAS congratulated the staff and wished them success. Turkish academician of the International Academy of D.Kidirali A.Alizade gold medal was presented.

International Relations Department of the Office of the Presidium of the National Academy of Sciences, doctor of geological-mineralogical sciences Gulam Babayev and influential scientists of foreign academic institutions congratulated his counterpart on the 70th anniversary of ANAS.

At the end of the 70th anniversary of the Academy's "Science Temple" film was shown.