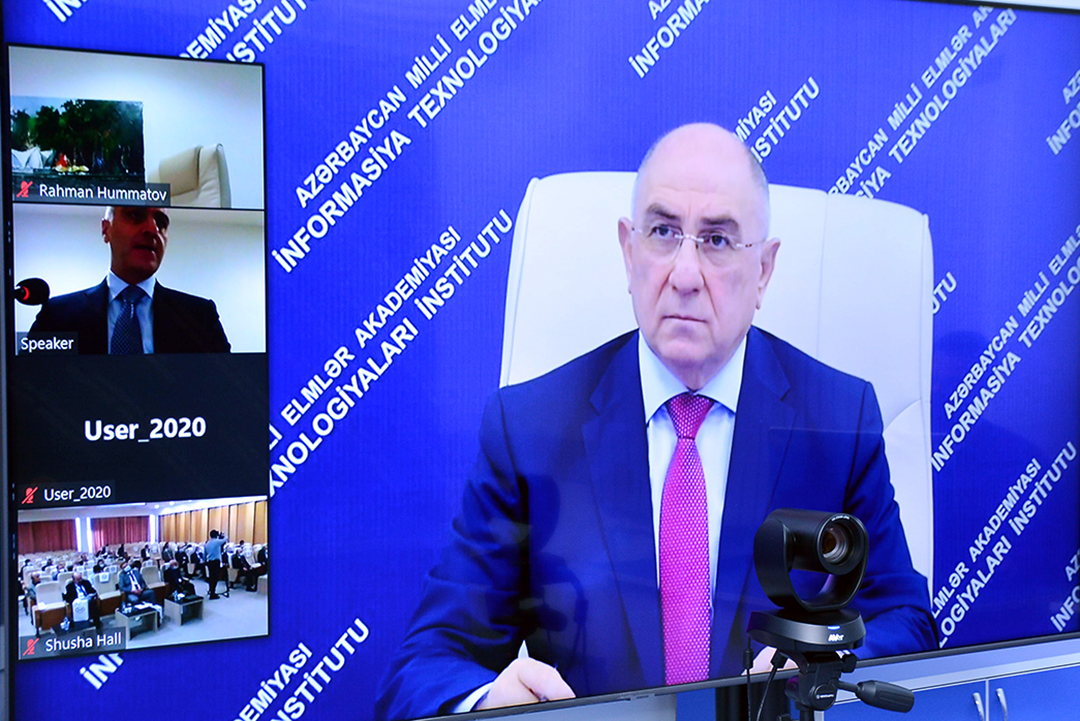 The Institute of Management Systems of ANAS (ISI), Azerbaijan Technical University, Silesian Technological University of Poland and Technical University of Georgia together organized an international conference on “Logistics, management and operational problems in the East-West Transport Corridor”. At the international conference which held in a hybrid format, Azerbaijan, including Poland, Germany, Russia, the United States, Ukraine, Romania, Lithuania, Georgia, Bulgaria, Belarus, Kazakhstan and others, scientists and specialists from different countries took part.

Opening the conference, ISI Director General, Academician Ali Abbasov greeted the participants and informed them about the agenda of the event. Touching upon the importance of the conference, Abbasov noted that the East-West transport corridor is an integral part of the former Silk Road and is an initiative that requires the development of new mechanisms for regional economic cooperation. This corridor strengthens economic development, cultural exchange and communication between member countries. As one of the central countries of the transport corridor, great steps have been taken in our country, various projects have been implemented at the state level.

Speaking later, Deputy Minister of Digital Development and Transport Rahman Hummatov stressed that Azerbaijan is located at the crossroads of East-West and North-South transport corridors, and the development of transit potential using this favorable position is one of the main priorities of transport policy in the region. Speaking about the transport infrastructure, Hummatov spoke about the projects implemented by our country. He expressed confidence that the goals of the projects will be achieved in the coming years, as well as statistics on the use of the potential of the East-West corridor, cooperation with other countries, non-physical barriers, existing tariffs, competition and the conference will contribute to solving these problems.

Then, the vice-president of ANAS, academician Rasim Alguliyev greeted the participants of the international conference on behalf of the leadership of ANAS, the staff of the Presidium, the Department of Physical, Mathematical and Technical Sciences of the Academy.

The scientist said that logistics and management issues in the East-West transport corridor do not seem to be an academic problem at first glance, but an object of study of certain field problems. However, the ongoing processes in the world, the IV Industrial Revolution, modern challenges, on the other hand, the recent geopolitical realities in all countries, including Azerbaijan, require an academic approach to transport infrastructure.

Academician R. Alguliyev stressed the importance of the international conference dedicated to the discussion of the problems of transport infrastructure, which is a complex socio-technological mechanism, and the search for solutions. He noted that the involvement of the Institute of Management Systems, as well as higher education institutions and leading universities of other countries in this field by the relevant decision of the Presidium of ANAS is commendable.

The scientist stressed the importance of discussing such conceptual issues and finding solutions to existing problems at the meetings of the Presidium of ANAS, the Department of Physical, Mathematical and Technical Sciences of ANAS. He noted that based on the new realities in the country, modern challenges and ideas emerging at the conference, it is expedient to develop proposals and submit them to the leadership of ANAS and relevant government agencies. There is a need to develop a national concept for the development of the country's transport infrastructure in the near future. ANAS is ready for any cooperation in the relevant directions.

The vice-president of ANAS thanked the organizers for actualizing the problems related to transport infrastructure before the Azerbaijani society, as well as the international community, called on scientists and specialists to cooperate in this direction and wished success to the conference.

Sadig Gurbanov, Chairman of the Parliamentary Committee on Natural Resources, Energy and Ecology, expressed confidence that the conference would contribute to the future development of the East-West corridor in Azerbaijan. Gurbanov touched upon the advantages and ecological aspects of the East-West transport corridor. He stressed that given the potential of the Fourth Industrial Revolution, the application of digital technology and the digital economy can be widely used in solving these problems as a contribution to global ecology in general.

Rector of Azerbaijan Technical University, Professor Vilayat Valiyev once again drew attention to the issues raised by the conference participants. Speaking about the opening of Fizuli International Airport on October 26, 2021, he stressed the importance of the new environment in the field of transport and logistics in the region after the victory in Karabakh.

Alexander Sladkovsky, Professor of the University of Technology of Silesia, said that the scientific problems raised by the speakers are of concern not only to Azerbaijan, but to all countries of the world. In particular, he noted that the current difficult situation with the coronavirus pandemic has had a negative impact on the world economy, noting that in the last two years there have been serious problems, especially in the transport sector, transportation and delivery of products.

Then, Professor of the US International Institute of Electrical and Electronics Engineers Abzatdin Adamov said that the development of aerospace equipment is one of the main directions of the institute. He gave detailed information about the work done in the field of technology in his organization, the tasks ahead in the post-pandemic period, cooperation. He spoke about the importance of technology in modern times, especially in pandemics, and said that it is one of the most important means of communication.

The conference continued with a plenary session.