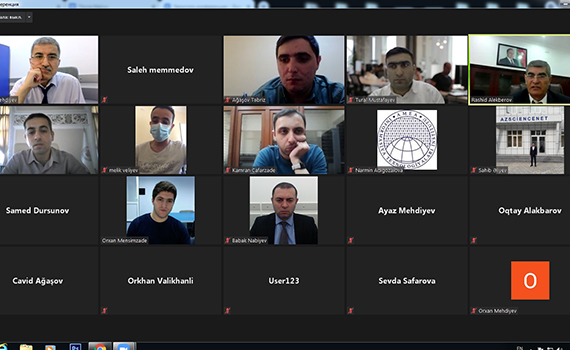 This was announced by the programmer of the institute Tabriz Agashov during his speech at the online scientific seminar on "Mobile communication technologies: prospects and areas of application" of the 4th department of the Institute of Information Technology of ANAS.

Giving an overview of mobile communication technologies, the speaker spoke about the 1st generation network technology (1G), noting that the first generation 1G telecommunications system was created in the 80s of the last century. The system is implemented in Europe through NMT (Nordic Mobile Telephone system) and TACS (Total Access Communications System), and in the United States through AMPS (American Mobile Phone System).

Agashov noted that the 3rd generation mobile networks (3G) are wireless networks based on international technologies and standards, created in 1988 by the Japanese company NTTdocomo: “3G has been used in America since 2002, and in Europe since 2003. Unlike the previous generation, the technologies in the 3G mobile networks are not based only on voice calls, but also on the Internet.

The researcher, who spoke about 4G, said that the system was created in 2009 by TeliaSonera. Its services were first used by residents of Stockholm and Oslo. 4th generation network technologies support WiMax and LTE standards. WiMax is characterized by longer transmission, higher speed and cheaper. But it also leads to higher energy consumption. He noted that the LTE communication standard was established in 2004 by the telecommunications authority 3GPP. LTE networks offer a wide range of coverage, high reliability, high performance, affordable prices, etc. offers services.

Then T. Agashov spoke about the 5th generation network technology (5G). According to him, 5G is one of the most talked about technologies in the last decade and is a new generation wireless networking technology for digital mobile networks, which will become widespread in 2019. 5G can provide fast internet up to 20 Gb per second, but this is only possible at high frequencies (15 GHz and above).

According to the speaker, the speed and higher capacity of the 5th generation network technology will allow networks to manage more information and will also contribute to the development of the Internet of Things (IoT). Services such as instantaneous fast download and calculation of data stored in cloud technology are performed. It will help collect data through devices used in fifth-generation communications systems, plan energy infrastructure more efficiently, and take action to reduce downtime.

The high speed and wide coverage of the fifth generation communication system will lead to the widespread use of the Internet of Things in agriculture and the emergence of more applications. In addition, 5G is widely used in the field of health, and 5G technology provides new opportunities and new services for this field.

Agashov also spoke about the leading companies using 5G, including corporations such as Intel, Verizon, Samsung, LG, Macom and Mediatek. He noted that devices that support 5th generation network technology include "5G Router", "5G Module", "5G Smartphones", "5G Modem", "5G Antenna" and others. an example can be given.

The sides exchanged views on the report and answered questions of the seminar participants.