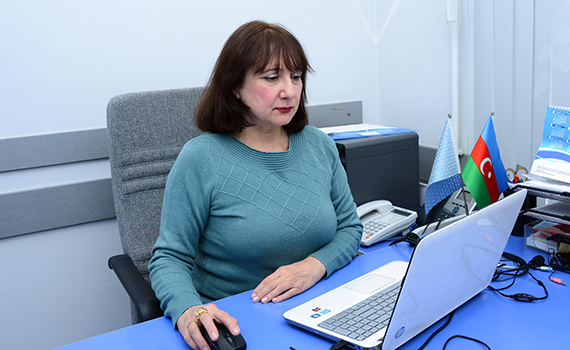 A model has been proposed for the application of OLAP technology in the e-demographic environment 2020-11-21 15:42:00 / CONFERENCES

16th department report of the Institute of Information Technology of ANAS for 2020 was heard online. Presenting the report, the head of the department, PhD in Technology Gulnara Nabibayova informed about the work done this year.

The speaker noted that the department first proposed a model for the application of OLAP technology in the electronic demographic environment, at the same time a multi-criteria evaluation of websites using a pairwise comparison algorithm of alternatives. The head of the department noted that in the reporting year, research was conducted to model dynamic processes within the terminological information system, as well as a comparative analysis of methods for automatic extraction of terms from texts. He noted that methods based on link analysis have been developed to combat web spam this year, the problems of transliteration of Azerbaijani graphics into graphics of other languages on the multilingual Internet have been studied, as well as a comparative analysis of different approaches and methods for transliteration of relevant person and place names. The branch manager also said that research is being conducted on the current state and problems of Internet sociology.

G.Nabibeyova noted that the department studied the issues of naming Azerbaijani citizens in the global information society and developed a number of proposals, as well as some work was done to establish the National Toponymic Geoinformation System.

The speaker also noted that in the reporting year, the employee of the department defended his master's dissertation on “Analysis and evaluation of the effectiveness of website analytics tools.”

Speaking about the scientific-innovative activity, the speaker noted that the website www.transliterasiya.az created by the employees of the department was presented this year, as well as the websites hosted in the Data Center of the AzScienceNet Science Computer Network were continuously supported.

G.Nabibayova said that the employees of the department participated in scientific-technical conferences and symposiums with 2 reports and 4 articles were published in well-known scientific journals, and 2 more articles were in the review stage in journals indexed in international databases.

The scientist also gave detailed information about the scientific-pedagogical and scientific-organizational activities of the department, the promotion of scientific-practical results in the media and the measures taken in the framework of international scientific cooperation.

There was an exchange of views on the report, opinions and suggestions were voiced, questions were answered. By the decision of the Scientific Council, the report of the department was considered satisfactory.

Vice-president of ANAS, director of the institute, academician Rasim Alguliyev shared his views on the report and praised the scientific researches, in the coming years, he recommended the development of a system that supports decision-making in the e-demographic environment, a deeper study of the organization and management of the National Terminology Information System, technologies and methods to combat web spam.