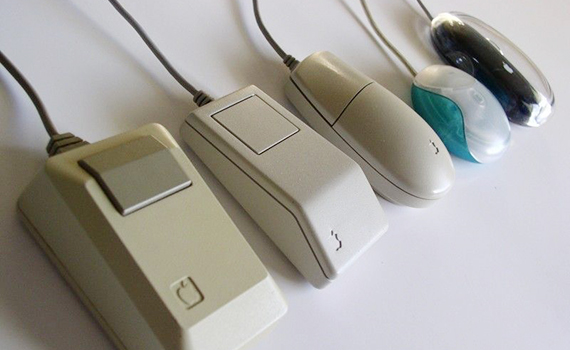 December 9, 1968 is considered the birthday of a computer mouse. It was on this day that the American inventor Douglas Engelbart of Stanford Research Institute at the conference on computer technology in San Francisco demonstrated the world's first computer mouse.

This invention was a wooden cube on wheels with one button. The computer mouse owes its name to the wire - it reminded the inventor of the tail of a real mouse.

The first mouse was assembled by engineer Bill English, and Jeff Roulifson wrote programs to demonstrate the possibilities. Inside the device were two metal disks: one turned when the device was moved forward, the second was responsible for moving the mouse left and right.
Later, Xerox became interested in Engelbart's idea. Her researchers changed the design of the mouse, and she became like a modern one. In the early 1970s, Xerox first introduced the mouse as part of a personal computer. She had three buttons, instead of disks a ball and rollers, and cost 400 dollars!
In 1983, Apple launched its own single-button mouse model for the Lisa computer, which was reduced to $ 25. The mouse gained wide popularity due to its use in computers Apple Macintosh and later in Windows for IBM PC.

Today, there are two types of computer mice: mechanical and optical. The latter are devoid of mechanical elements, and optical sensors are used to track the movement of the manipulator relative to the surface.

But the design of modern mice is simply amazing ...

In the late 1990s, Sun Microsystems introduced the first laser mouse. It is characterized by higher accuracy and low power consumption. Mass production of laser mice began in 2004.
The latest technology has become a wireless mouse. Initially, each manufacturer developed their own signal transmission method for them. However, subsequently, a Bluetooth connection became increasingly used for communication, which made it possible to get rid of the receiving device, since a number of computers (for example, laptops) are already equipped with a Bluetooth adapter. But the design of modern mice is simply amazing - from traditional forms to mice in the shape of a car or a gold bar, a female body or a heart, a beloved animal or fruit, with rhinestones or graffiti ... For every taste!