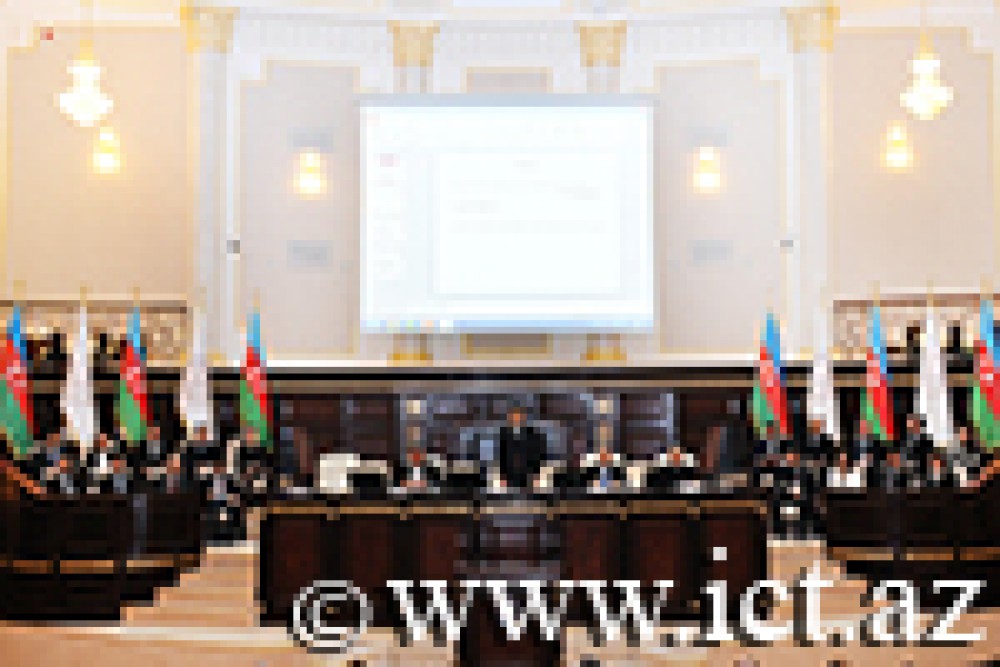 Young Scientists and Specialists Council of the Institute of young scientists in 2014 I spoke at the reporting conference 2015-02-02 11:04:25 / CONFERENCES

Today, the main building of the National Academy of Young Scientists and Specialists Council's 2014 report on the first election was held. At the meeting the president, Akif Alizadeh, Minister of Youth and Sports Minister Azad, Executive Director of the Science Development Fund under the President E. Babaev, President and Executive Director of the Youth Foundation Farhad Hajiyev, director of the Institute of Information Technology, National Academy of Sciences, Academician-Secretary, academic Aliguliyev, including NASA scientists and experts took part.

The event Institute of Information Technology "President's Award for Youth" to the candidate, a member of the Council of Young Scientists and Specialists, made a PhD in Nigar Ismailov.

"Recently, President of the National Academy of Sciences, acad One of the Academy of Sciences of the importance of scientific institutions and organizations in the provision of ICT" - he said Nigar İsmayılova employees currently at the National Academy of Sciences, especially young people, without limitation, the fact that they have access to high-speed Internet said. According to NASA, the European Data Centre, which provides integration of science and education, environment, all regions of the country, especially in the formation and structure of scientific network of Ganja and Nakhchivan. Expanding opportunities for the application of ICT in the academy is one of the reforms.

According to him, the young scientists to take advantage of all the opportunities offered by ICT and social networks that have proven important discussions, and intellectual functioning in young people of Azerbaijan "2020" concept has been operating in accordance with the requirements.

Global world, including adequate representation in the virtual space and the virtual fight against the enemies of conduct adopted in the "Wiki-center on the" judgment of 15 January 2014, he stressed the importance of instruction N.Ismayilova acad all academic institutions with established groups of young people said that wiki. The Institute of Information Technology to train young people and for the sake of the virtual space to function as a result of wiki-soldiers in recent years in the number of articles published on Wikipedia exceeded 100 thousand, as well as the history, culture and correct information about the exact number of the articles said.

According to the speaker, integrated into the international scientific and scholarly works published in indexed journals in the world of high-reference is one of the main activities of the ADA: "Young scientists will be regularly sent to foreign countries, the world's leading scientific organizations through programs including post-doktoralık functioning of the international policy environment for the integration of research results acad. Thanks to the reforms carried out in this field in the NASA portal science.az number of applications increased by 3 times over a period of 1 year. "

N.Ismayilova the President of Azerbaijan Ilham Aliyev for the attention of Information Resources Fund, a fund of the highest technologies, providing access to international scientific databases have been eliminated as a result of the issue of the provision of information for young scientists. In addition to access to international scientific bases of Azerbaijani scientists, said that the most important issues in these databases increase in scientific publications. The formation of high-level skills in English to write articles for Young Scientists for Science Development Fund under the President of the Republic, Thomson Reuters, Elsevier, Springer publishers, such as training seminars held by the Special Rapporteur that the quality of the training articles, trained in prestigious journals in compliance with the requirements of the rules, a high-level inculcation of knowledge and talked about for the construction of scientific publications. She works of Azerbaijani scientists in recent years, and it works Scopus scientific basis of the significant increase in the number of citations as an indicator of the effectiveness of the reform process.

Academic AƏlizadəyə science, education, care and attention, especially young people, expressed his gratitude for the excellent scientific environment for the sake of solidarity with the N.Ismayilova colleagues called them to be.

In the end, the council discussed the issue of the selection of new members. N.Ismayilova elected by voting members of the board.